QUESTION 11
Refer to the graphic. Host A is communicating with the server. What will be the source MAC address of the frames received by Host A from the server? 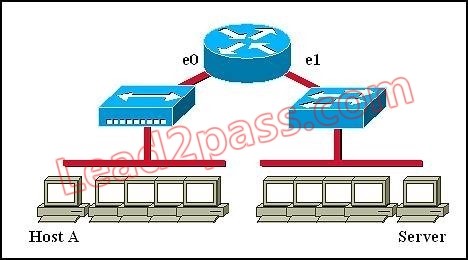 Explanation:
Whereas switches can only examine and forward packets based on the contents of the MAC header, routers can look further into the packet to discover the network for which a packet is destined. Routers make forwarding decisions based on the packet’s network-layer header (such as an IPX header or IP header). These network-layer headers contain source and destination network addresses. Local devices address packets to the router’s MAC address in the MAC header. After receiving the packets, the router must perform the following steps:
1. Check the incoming packet for corruption, and remove the MAC header . The router checks the packet for MAC-layer errors. The router then strips off the MAC header and examines the network- layer header to determine what to do with the packet.
2. Examine the age of the packet. The router must ensure that the packet has not come too far to be forwarded. For example, IPX headers contain a hop count. By default, 15 hops is the maximum number of hops (or routers) that a packet can cross. If a packet has a hop count of 15, the router discards the packet. IP headers contain a Time to Live (TTL) value. Unlike the IPX hop count, which increments as the packet is forwarded through each router, the IP TTL value decrements as the IP packet is forwarded through each router. If an IP packet has a TTL value of 1, the router discards the packet. A router cannot decrement the TTL value to 1 and then forward the packet.
3. Determine the route to the destination. Routers maintain a routing table that lists available networks, the direction to the desired network (the outgoing interface number), and the distance to those networks. After determining which direction to forward the packet, the router must build a new header. (If you want to read the IP routing tables on a Windows 95/98 workstation, type ROUTE PRINT in the DOS box.)
4. Build the new MAC header and forward the packet. Finally, the router builds a new MAC header for the packet. The MAC header includes the router’s MAC address and the final destination’s MAC address or the MAC address of the next router in the path.

QUESTION 12
Refer to the exhibit. What two results would occur if the hub were to be replaced with a switch that is configured with one Ethernet VLAN? (Choose two.) 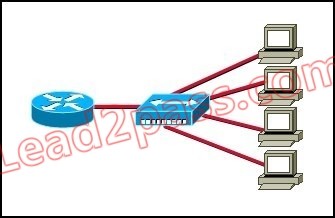 A.    Spanning Tree Protocol allows switches to automatically share VLAN information.
B.    Establishing VLANs increases the number of broadcast domains.
C.    Switches that are configured with VLANs make forwarding decisions based on both Layer 2 and
Layer 3 address information.
D.    Microsegmentation decreases the number of collisions on the network.
E.    In a properly functioning network with redundant switched paths, each switched segment will contain
one root bridge with all its ports in the forwarding state. All other switches in that broadcast domain will
have only one root port.
F.    If a switch receives a frame for an unknown destination, it uses ARP to resolve the address.

QUESTION 14
Where does routing occur within the DoD TCP/IP reference model?

Answer: B
Explanation:
The picture below shows the comparison between TCP/IP model & OSI model. Notice that the Internet Layer of TCP/IP is equivalent to the Network Layer which is responsible for routing decision. 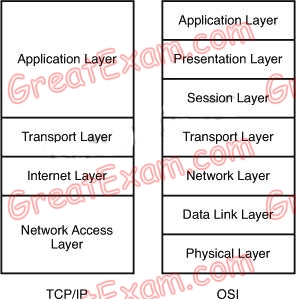 QUESTION 15
Refer to exhibit: Which destination addresses will be used by Host A to send data to Host C? (Choose two.) 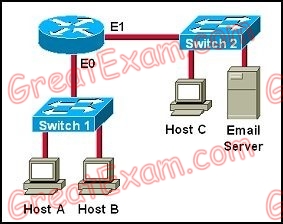 QUESTION 16
For what two purposes does the Ethernet protocol use physical addresses? (Choose two.)

QUESTION 17
Refer to the exhibit. Based on the information given, which switch will be elected root bridge and why?

QUESTION 18
Refer to the exhibit. Switch-1 needs to send data to a host with a MAC address of 00b0.d056.efa4. What will Switch-1 do with this data? 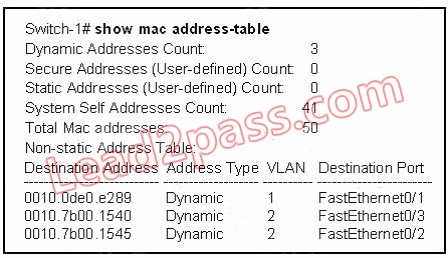 Answer: B
Explanation:
This question tests the operating principles of the Layer 2 switch. Check the MAC address table of Switch1 and find that the MAC address of the host does not exist in the table. Switch1 will flood the data out all of its ports except the port from which the data originated to determine which port the host is located in.
Switches work as follows:
In output there is no MAC address of give host so switch floods to all ports except the source port.

QUESTION 19
What value is primarily used to determine which port becomes the root port on each nonroot switch in a spanning-tree topology?

QUESTION 20
What is the function of the command switchport trunk native vlan 999 on a Cisco Catalyst switch?